18 Jun It’s A Silver Anvil For The “Arrest The Risk” Campaign! 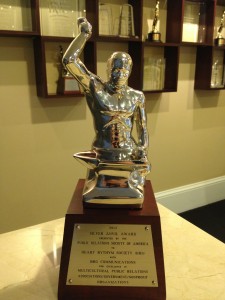 We try not to use this blog to brag, but today we’re making an exception. We’re thrilled to share that Heart Rhythm Society and BRG won a Silver Anvil for greatness in Multicultural Public Relations from the Public Relations Society of America for the “Arrest the Risk” Sudden Cardiac Arrest Awareness Campaign.

Sudden cardiac arrest (SCA) is the leading cause of death in the United States. 95 percent of people who experience SCA will die as a result. African-Americans are more likely to die from SCA than other populations. Using new research, the “Arrest the Risk” awareness campaign was developed to elevate the dialogue about SCA, its symptoms, risk factors, and treatment in effort to improve overall awareness and understanding among at-risk African-Americans. HRS partnered with the Association of Black Cardiologists to expand grassroots reach for the campaign.

The combination of fresh data and educational information enabled us to reach the African-American community, drive awareness about SCA and provide education that empowered people to make simple changes that can increase their life span. This campaign is a great example of what Communications For Better Living™ is all about.

Congratulations to all the Silver Anvil finalists and winners, especially those in our category including National Heart, Lung, and Blood Institute’s campaign The Heart Truth, and the County of San Diego Health and Human Services Agency’s fotonovela Salir Adelante: promoting good mental health for every Latino in San Diego.

To read more about our work with Heart Rhythm Society click here, and here.